At $600 per pound, kopi luwak is the most expensive coffee in the world (according to Wikipedia). By comparison, pure Jamaica Blue Mountain, widely considered one of the priciest coffees, is typically $30 to $50 per pound. You would pay that much for an ounce of kopi luwak beans.

Kopi luwak is a truly unique product. It begins when the bright red coffee berries that contain the seed (or bean) from which all coffee is made, are eaten by a wild civet, a small mammal that lives in tropical Asia and Africa. Luckily for coffee connoisseurs, civets are able to digest the red fleshy pulp that surrounds the seed but they can't digest the seeds themselves. So after the seeds pass through the civet's digestive tract, tribesmen gather the scat, clean it, roast the beans, and create this very unusual "civet coffee," or kopi luwak. The civet’s stomach enzymes apparently reduce acidity and bitterness while contributing a distinctive taste and aroma to the coffee beans. Aficionados claim that the result is a smoother, more complex flavor in the brewed coffee. 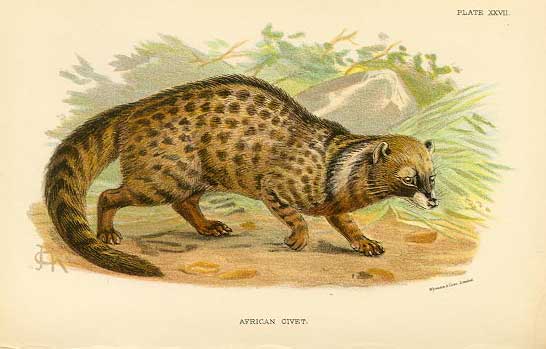 I originally learned about kopi luwak in the Wine Spectator, of all places. In addition to covering wine, WS also publishes stories about other beverages, including coffee. Mark Pendergrast is their go-to guy on this topic, a logical choice considering the fact that Pendergrast literally wrote the book on coffee: Uncommon Grounds: The History of Coffee and How It Transformed Our World. For the November 30 issue of Wine Spectator, Pendergrast wrote an article about Doi Chaang Coffee, a small but growing coffee cooperative in northern Thailand. Their coffee beans, writes Pendergrast, “are comparable to the best Kona beans.” One of the products that Doi Chaang sells is civet coffee.

If you haven’t heard of Doi Chaang, or even tried coffee from Thailand, that’s understandable. The company itself is not very old, and Thailand hasn’t yet gained the reputation of major coffee-exporting countries like Ethiopia or Columbia. According to Pendergrast, coffee farming in the region where Doi Chaang has its plantation was only introduced in the 1980s. Prior to that time, the area was dominated by opium producers – thugs and criminals who forced the local tribes to work for them in the production of opium. This began to change in 1983, when the king of Thailand ordered the introduction of coffee to the hill tribes in an effort to stem the opium trade and replace the poppy crop with a viable alternative.

Overall, the switch from poppy to coffee was positive for the hill tribes in this region of Thailand. However, it wasn’t until they began working together in cooperatives like Doi Chaang that the tribes gained a measure of control over the marketing and sales of their coffee. Initially, as individual farmers they were at the mercy of coffee brokers, who paid much less than the coffee was worth and then blended the high-quality mountain-grown coffee with inferior beans.

The Doi Chaang coffee cooperative itself began in 2001 when a charismatic Thai man named Wicha Promyong suggested the idea to the Akha tribe, one of the groups of people who had been growing coffee in northern Thailand.

In the beginning, the cooperative farmed 200 acres and sold its coffee to dealers for roughly 25 cents per pound. Today, Doi Chaang farms 8,000 acres and sells coffee beans for as much as $4 or $5 per pound. That’s made a remarkable difference for the Akha tribe. Pendergrast tells the story of their transformation:

From their profits, Akha have created a Coffee Academy to teach farmers proper cultivation and processes, along with financial and environmental essentials … The village now has running water, a sewage system, electricity, a medical clinic and improved roads. Adults who had to leave as children to earn a living are returning. The Doi Chaang Coffee Foundation is building a school for 400 children and wants to help other hill tribes, whose estimated 1.2 million people each earn less than $1 a day. (Wine Spectator, November 30, 2012)

In addition to Promyong, there is one other person who has played an important role in helping to establish the Doi Chaang brand. John Darch is a Canadian business man who invested in Doi Chaang after meeting Promyong several years ago. Darch’s involvement has been instrumental in helping the cooperative grow beyond the domestic Thai market and reach consumers in North America and Europe. And the international sales have in turn helped the Akha tribe achieve some of the improvements Pendergrast describes. Prior to Doi Chaang, the Akha “maintained only a marginal existence,” according to Pendergrast. He calls them “a proud people” who for many years were looked down upon “as ignorant, superstitious peasants.”

And that’s what appeals most to me about Doi Chaang. I’m sure their coffee is quite good; it’s certainly received high marks from coffee reviewers and experts, including Pendergrast. No, what I like most is the story of the people and their transformation – their hard work and eventual success.

In this video, Darch, Promyong, and others talk about how the importance of Doi Chaang to the community of Akha. You can’t help but to be impressed by the resourcefulness, determination, and creativity of these people, especially Promyong. He saw how the hard-working Akha tribe could use a business opportunity to dramatically improve their condition and bring dignity to this deserving group of people. It’s really a wonderful story.

One of the more remarkable aspects of Doi Chaang is how even as the company has built its coffee business, it has refused to rest on its success. The cooperative has expanded into secondary products like honey, soap, and tea that are built around the core business while using the resources available to the coffee farmers.

But the most interesting item Doi Chaang sells is undoubtedly its Wild Civet Coffee which goes for nearly $500 per pound. Is it good? Opinions vary on the subject of kopi luwak. In his Wine Spectator article, Pendergrast described Doi Chaang's Wild Civet Coffee as "even smoother than regular Doi Chaang, with dark chocolate notes, a tart acidity, and lingering sweetness."

Others have been less generous about kopi luwak. According to Wikipedia, "Some critics claim...that kopi luwak is simply bad coffee, purchased for novelty rather than taste." Needless to say, I’ve never tried it. But if you’re curious, you can decide for yourself whether it's worth the money. $55 plus shipping will get you 50 grams, enough to make about 3 cups.

Filed under Food - Other